Considering successes are so hard to roll in Forbidden Lands, it seems a waste of potential data to ignore multiple successes, outside of extra damage in combat. It’s also odd seeing as Fria Ligan’s other games all use multiple successes to some degree. So, I’ve mined them for inspiration and come up with these suggested non-combat criticals and stunts.

N.B. They are all completely unplaytested, so comments are welcome.

EDIT: Thanks to some feedback from the Fria Ligan forums I’ve removed the sharing successes options, altered the Stealth suggestion to be in line with the existing rules and made the option for critical wounds option on Melee and Marksmanship more difficult.

Might (STRENGTH)
For every success after the first, you may:

Endurance (STRENGTH)
For every three successes, the next roll (such as for resisting poison, cold or drowning) only needs to be rolled half as often. For example, while hiking through a snowstorm where you have to roll to resist the cold every hour, after a critical roll of three successes, you do not need to roll again for two hours.

Melee (STRENGTH)
For every five successes, you may, as well as causing the rolled damage:

Crafting (STRENGTH)
If you roll three or more successes, the item gains one, and only one, +1 Gear Bonus. This is in addition to any bonuses from the use of relevant Crafting talents.

Stealth (AGILITY)
For every success after the first, you may:

Sleight of Hand (AGILITY)
For every three successes, you may:

Marksmanship (AGILITY)
For every five successes, you may, as well as causing the rolled damage:

Scouting (WITS)
As well as seeing what something is and whether it’s a threat, as per the rules, for every extra success the GM will answer an additional question about it, such as:

Lore (WITS)
You get additional information and +1 bonus die to one roll when you use that information (up to +3).

Survival (WITS)
Multiple successes for use of Survival are already part of the Journey rules in the Players Handbook.

Insight (WITS)
As well as revealing an NPC’s strongest current emotion, as per the rules, for every extra success the GM will answer an additional question about them that you could reasonably intuit, such as:

Manipulation (EMPATHY)
Any option chosen must be plausible and make narrative sense. As well as agreeing to your deal, as per the rules, for every success beyond the first, the NPC:

Alternatively, for every three successes, the NPC:

Multiple successes are already a part of the Performance skill rules for recovering Wits in the Players Handbook.

Healing (EMPATHY)
Multiple successes are already a part of the Healing skill rules in the Players Handbook.

Animal Handling (EMPATHY)
When riding, for every success after the first, you and your mount share +1 bonus die to one roll related to the same period of riding (typically, on the same day).

For every three successes, taming a wild animal takes one day fewer. 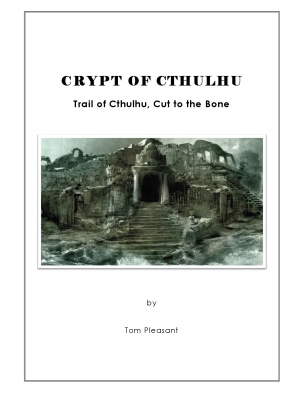 Compared to most games, Trail of Cthulhu is hardly complex mechanically, but for the past 10 years I’ve increasingly preferred simpler games.

(There’s a limit though. Completely freeform, stat-free games can be fun as one-shots, but they leave me hungry for something, anything, to study and ponder at the table.)

This is Crypt of Cthulhu, a hack of Trail that takes some inspiration from Cthulhu Dark and Barbarians of Lemuria, but also standardises some of the traits in Trail. I think it works surprisingly well. 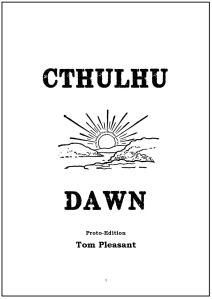 As much as I love extremely grim and gritty games, I can also be extremely silly. That’s why I seem to be one of the only people who thought it was a natural fit to mash together Cthulhu Dark, the bleak and unforgiving game of cosmic horror with Og, the cavefolk game of slapstick hilarity.

So, here it is in all it’s glory: Cthulhu Dawn – Proto Edition.

I’ve pitched to run it many times, but only managed to persuade two small groups to play it. If you ever do, let me know how it goes!